We have a range of art based on some of the most famous Battles and Wars throughout history. Art can be printed onto any size canvas you choose and will be delivered FREE by UK Courier ready to hang on your wall.

The Defence of Rorke’s Drift by Alphonse De Neuville

Just over 150 British and colonial troops successfully defended the garrison against an intense assault by 3,000 to 4,000 Zulu warriors. The massive, but piecemeal, Zulu attacks on Rorke’s Drift came very close to defeating the tiny garrison but were ultimately repelled. Eleven Victoria Crosses were awarded to the defenders, along with a number of other decorations and honours. 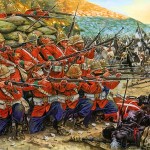 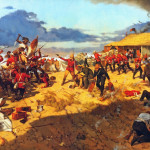 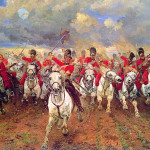 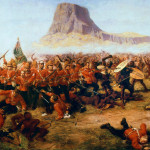 
Order your War & Battle Canvas print from our store – all canvases are printed using Epson 11 colour HDR Inks and are 75 years fade resistant with a vibrant depth of colours only achievable by such a high standard print process. Canvases come in a wide range of sizes so you can just select your image and then the size you require. Canvases supplied ready stretched on a secure wooden frame and ready to hang on your wall. All with Free UK Courier Delivery